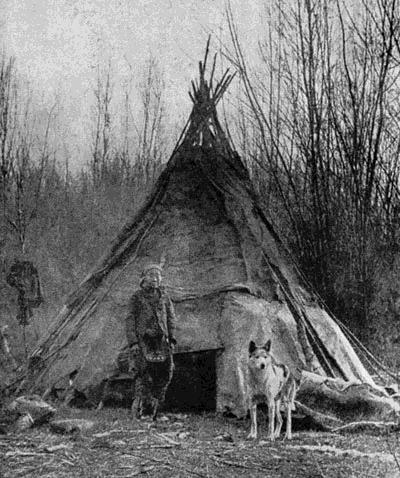 The Siberian is one of the most undiluted of all the northern breed sled dogs which is claimed to have been bred pure for about 3,000 years. Needless to say if you adopt a Siberian Husky you are bringing home a dog that has a lot of history behind it! Of course being the SIBERIAN Husky, the Chukchi tribe was located in north-east Siberia in the Yakutsk region, north of the Stanovoi Mountains.
The presence of the Siberian Husky within the tribe meant the difference between life and death for the local nomads. Their huskies made it possible to survive when they were forced to expand their territory. The Chukchi were selective of the dogs that they allowed to reproduce. They had a custom to castrate all but the best lead dogs, in this way, to ensure regular genetic improvement in the breed. It was the womens job to care for the dogs when they weren’t working. The women caring for the dogs meant that these dogs were going to be close to the Chukchi children. So of course behavior was very important. Only non-aggressive dogs were favoured. So century after century, both the working abilities and the temperment of these dogs gradually improved. In the end the Chukchi ended up developing a super-dog.

The Siberian is the smallest and fastest of the northern breeds. They were built to carry lighter loads (such as killed game) at high speeds over amazingly long distances. At the end of the 19th century Americans started hearing about these exceptional working dogs and a team was imported and participated in a major Alaskan sled race in 1909. These dogs were winning nearly all the races, easily beating the larger, more powerful, but slower malamutes and Eskimo dogs. Soon to be regarded as the supreme racing sled dog. 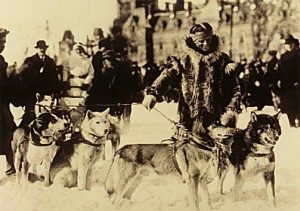 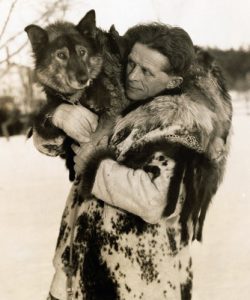 Everyone knows the story of Balto (left)). But, because of the movie, some major details of the run are being overlooked. The famous diphtheria run took place in 1925 when there was a serious outbreak in Nome, Alaska. Balto was one of many dogs used on this journey. Another lead dog being Leonhard Seppala’s Togo (right). Lives were saved because of these teams and a statue commemorating these dogs stands in Central Park in New York. This event is what made the breed widely known, and only a few years later, the breed was finally recognized by the AKC. 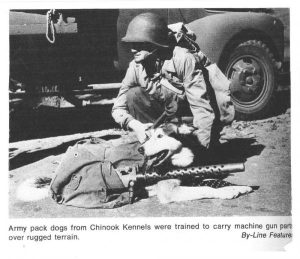 The Siberian, along with other breeds, were used in the military as well. From search and rescue dogs in the arctics where other breeds couldn’t withstand the extreme cold, working to haul supplies to troops in distant places, as well as carrying packs which may contain supplies or even machine gun parts.

Words used to describe this dog include tireless, dignified, athletic, agile, friendly, gentle, independent and alert. The Siberian Husky reveals its wolf-like personality in the way that it rarely barks, but does enjoy bouts of communal howling. There have been times a Siberian Husky has been bred with a wolf/dog. But you have some breeders who try to tell you that you have a wolf; wrong, you have a DOG. If a true wolf/dog goes into most shelters, they are immediately euthanized. We get calls from people wanting to breed one of our huskies to sell. However, we spay and neuter our rescues. These people are all backyard breeders, and don’t care or know the quality of the dogs they are breeding. For more information on husky/wolfdogs:  www.fullmoonfarm.org

The Siberian Husky is a working dog that is VERY pack oriented. This is not a dog to be put in the yard on a chain or runner to live its life away from you. If you are going to be bringing a Siberian Husky into your family, you have to give the dog a job. It’s highly recommended that these dogs are put through some kind of training. They need mental stimulation! An hours worth of training can drain the dog like he has been running non stop for hours. I have seen this happen in person with my own husky. She can run at the dog park for hours, and yes I had her at the dog park for 6 hours once! But an hours worth of mental work teaching her new commands she is ready to just climb on the couch and take a nap. A tired husky is a happy husky. There are activities you can do with your husky that you can both enjoy as well. Urban mushing, scootering, bikejoring, canicross, hiking, flyball, and agility just to name a few. It

Huskies have bad reputations when it comes to training. They are hard headed and stubborn BUT they are extremely smart. They pick things up very quickly. As long as you stay constant and just as hardheaded as they are you can accomplish a lot with a Siberian Husky. You can reach out to a professional trainer in your area to guide you in the right direction on how to work with your dog as an individual as not all dogs are the same. Siberians can be taught to pull when you are working either in urban mushing or canicross to pull the line tight, as well as to heel and walk nicely on a leash. There are even Siberians used as service dogs! Never doubt the abilities of your dog. If you are determined and willing to stick to a training schedule with your dog you can achieve anything. The picture on the left is a rescue volunteers dog doing a ‘touch’ command during her advanced obedience training on her way to becoming a service dog.

Most of our rescues come from shelters. They may have been a stray (no ID), or an owner turn-in that previously had a very secure home.  The dog coming from a previous home may show the most stress.  Then there is the worst possible environment – a puppy mill. This dog would most likely have been subject to living in an unclean kennel with multiple dogs. You must acclimate the dog to indoor living and teach appropriate “house manners”. If your having trouble with a behavior problem contact Siberian Husky Assist to discuss alternatives.  Avoid hitting and shouting, which can cause great emotional stress to the rescue. Some adult rescue dogs need more care and attention than a puppy. But remember they are intelligent.  We encourage the short-term use of crate training.  It helps dogs adapt to their new environment more quickly, help in monitoring the level of housebreaking, protect furniture from younger or more “chewy” dogs, and also gives the Siberian a small ‘place of his own‘ where he knows he is safe.

They are fairly clean dogs, and considering they don’t need a bath but maybe twice a year, they usually have no body odor. They do shed more than any dog you will ever see. THEY BLOW THEIR COATS TWICE A YEAR. Brushing everyday will help bring out the undercoat, to help keep down on piles of hair in your home. Siberians have a double coat and despite what you think that coat not only protects them from cold but it also serves to product from heat. The coat insulates and allows the dog to help stay cool. Under no circumstances should a huskies coat ever be shaved because you think it will help them during the warmer months. You do more harm than good when you shave them. You take away their protection because without their coats their delicate skin is not protected from the harmful sun. We highly recommend learning the signs of heat stroke because same as with humans the husky has its limits! On those hot days let him have access inside where there is air conditioning and you can always set up a kiddie pool filled with water or even just ice. Make sure they have access to shade and always, always, ALWAYS have water available.

Siberian Huskies have a high predatory instinct.  Most often they are NOT good with small animals such as cats and rabbits, or the neighbors chickens!  Sometimes not smaller dogs! We get a lot of owners calling us to take their dog because it gets out and killed the neighbors cat, or chickens. Siberian puppies dig and chew due to their high energy level.  Sometimes this subsides with maturity, and other times it just tapers off…a bit.

THINK AHEAD!   If you MIGHT have to give up your husky because “girlfriend don’t like it“, “didn’t realize their is so much hair“, “going to go to college”,  “having a baby and won’t have time for“, “can’t housebreak“, “it has sooo much energy“, “he keeps jumping past me out the door and I have to run after him”, “my baby is crawling now and gets dog hair in hermouth“, “the dog is just all alone on a chain in the backyard, and I don’t have the time I thought I would to spend with her“, or any other reason we’ve heardto get rid of your pet,any pet, don’t get one.  They ARE a family MEMBER and  want to be with ONE family just like our kids.  Maybe get a sister/brother husky to play with, and for companionship. Two huskies can play and wear each other out if you do not have time to give one dog your complete attention.

Siberian Huskies are a great/fun breed. Once you understand the pack mentality, and include “them” as part of your family, (because you will not be happy with just one when you see the fun two or more provides), you too will know the feeling of being    “part of the pack”.

If you adopt this dog, could you honestly say that it would be in a safe, knowledgeable of the breed, home with attention, training and love for its entire life…12-15 years?